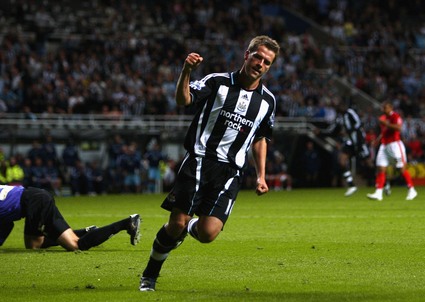 He’s still got it! When Little Michael Owen tucked the ball under the body of Barnsely’s keeper and into the net, it was the first time he’d scored in a competitive game since December 2005, some 20 months ago. The finish was a bit scuffed, but still, Owen thrives on goals, and this is welcome news both for Newcastle and England.
In the other Carling Cup matches last night, Boro beat Northampton 2-0 and Sven’s Man City looked very slick in beating Bristol City 2-1 at Ashton Gate. Bristol have been flying in the Championship and this was a very tough tie for a weakened Man City team. But they played some lovely football, with Italian striker Ronaldo Bianchi looking a bit special. Bianchi set up Emile Mpenza for City’s opening goal and then scored the winner with a smart shot from 20 yards.
Click below to see the results from all of Tuesday’s games. Three Premier League sides bit the dust: Derby were knocked out on penalties by Blackpool, Wigan’s second stringers lost at home to Hull and Roy Keane’s Sunderland were tonked 3-0 at Luton.
Photo Getty Images