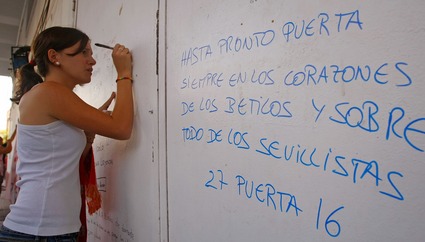 A girl writes a message in memory of Sevilla player Antonio Puerta on the outside of the Sanchez Pizjuan stadium on August 29, 2007 in Sevilla, Spain. Puerta, a 22-year-old Sevilla player, died on August 28 after suffering a heart attack during his team’s Liga match against Getafe in Sevilla. The message reads ‘See you soon Puerta, always in the hearts of Real Betis and especially Sevilla fans’.
Photo Denis Doyle/Getty Images