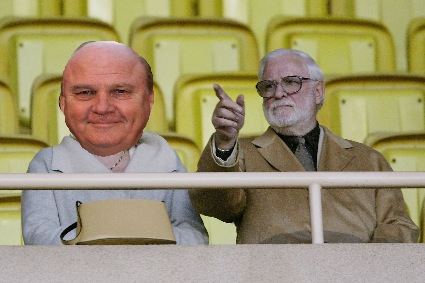 With talk of ex Newcastle bloke Sir Fred buying poor Leeds from Sir Ken, which of these two elderly evils would you prefer in charge of your club? Let’s compare the two…

Fred Vs Ken…
1) Personal loves:
Fred: Taking the piss out of Michael Owen to passing Scousers
Ken: Tax dodging (from only owning cows, to living in Monaco, Kenny doesn’t like paying tax)
Fred wins this round! That clip is a classic.
2) Personal hates:
Fred: Geordie women (or as he foolishly calls them “dogs”)
Ken: The FA
Ken wins this one. Has he ever actually been out in Newcastle on a Friday night? Those near naked Dorrises are splendid.
3) Low points:
Fred: Sacking Bobby Robson (how could anyone do that?)
Ken: Suggesting someone should shoot Sports Minister Kate Hooey.
Ken wins this too. Poor Bobby…
4) High points:
Fred: Bringing Shearer (or Mary Poppins as he called him) home to Newcastle
Ken: Bullying the ridiculous men who were building Wembley
Too close to call on round four
5) Lookalikes
Fred: Shrek
Ken: Santa
Everybody loves Santa! Ken wins this round by a mile!

Verdict: So it’s a 3-1 victory for Ken Bates, officially a lesser evil than Freddy Shepherd. I wonder how Peter Risdale compares?
Photos: Getty