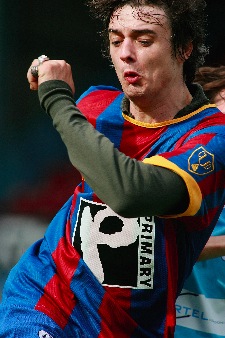 BRRRRRRRREAKING NEWS! Slightly smelly super hoops fan Pete Doherty apparently wants to become a football manager.
According to a report on NME.com today, the singer who once said “QPR is the only thing he prefers to narcotics”, is being lined up to manage a team suitable named Doherty FC.
The team will then face celebrity opposition (Ralph Little and friends) on telly. As much as we hate most celebrity football, we’d actually love to see that. So who would be in the Babyshambles Moss poker’s starting eleven. Click continue reading to see who we think he’d be most at ease with…
Photo: Getty

1) Mark Bosnich
There could be only one model loving naughty, naughty man between the sticks for Pete.
2) Ian Holloway
He sings, he’s mental, he lurves QPR… has to be in.
3) Robin Friday
The Reading and Cardiff legend has to be the most rock ‘n’ roll footballer of all time. Plus he’s the only man ever to be sent off for defecating in Lawro’s kitbag, which for our money is worthy of a place in any team.
4) Earl Barrett
Okay, Carl Barat would be better, but Carl’s long distant cousin Earl is as close to a Libertines reunion as we’re going to get any time soon…
5) Up The (Kenny) Jacket
Okay, okay, that’s not our best effort, but Kenny’s out of work at the moment, so he’d be up for it.
6) Glenn Hoddle
Perhaps football’s greatest ever singer. (Does rapping count as singing? If yes, Barnes is better.) The Diamond Lights legend, could croon with Pete in training.
7) Vic Kasule
Once described as “an armoured car of a winger” the Ugandan nutjob commonly known as “Vodka Vic” also liked a drink.
8) Stan Bowles
Pete’s all time hero, again, he just has to be in.
9) Adrian Mutu
Well, you know…
10) (Don’t Look Back Into the) Stephen Sunny Sunday
The young Valencia starlet fits the bill and would probably bang a few in.
11) Gianluca Vialli
The egg headed Italian legend loves smoking as much as Pete. He openly admits to smoking 10 a day even when he was playing for Chelsea. Bless.