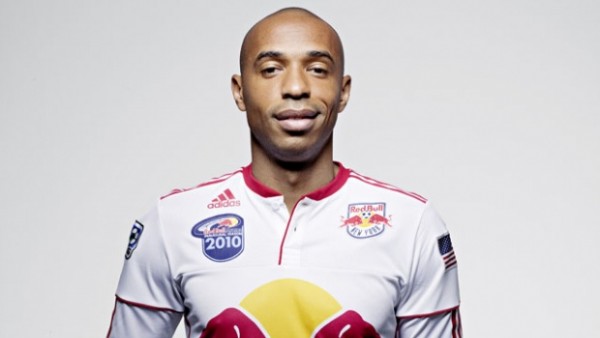 Thierry Henry has finally completed his move to the New York Red Bulls. It’s been on the cards for a while, with only the small matter of the World Cup preventing the move from taking place earlier this summer.

Henry’s scheduled to make his debut for the MLS club on 22 July, in a friendly against Tottenham. Ha! You couldn’t make that one up.

He will be ‘unveiled’ by his new club in a press conference tomorrow.

So, the big question: Is this a good move for TH or an admission that his time in the top flight is all but over? It’s not like he’s at the very end of his playing career – he’s only 32 and he could easily have moved back to the Premier League or another big European league, salary permitting.

I find it comical, if totally understandable, that the Red Bulls are hyping Henry as the antithesis of Beckham, ie. a world-class player who isn’t coming to America for the money and an easy ride. From the club’s official website:

“… Henry comes in his prime, a player one year removed from being the catalyst for Barcelona’s dominant run through La Liga and the Champions League.”

Er, not really true though. He’s about four years removed from his prime, as any Arsenal fan worth his/her salt will tell you. And he hardly featured for Barcelona last season.

And a puff quote by Henry on his new club:

“This marks an exciting new chapter in my career and life. It is an honor to play for the New York Red Bulls. I am fully aware of the team’s history and my sole goal during my time here is to help win the club its first championship.

“Knowing Red Bull’s significant commitment to soccer locally and internationally, I am confident that my teammates and I will succeed.”