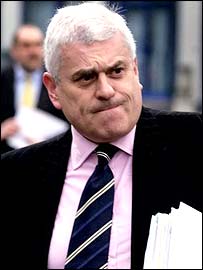 Every time I see or hear ‘Peter Ridsdale‘, I can’t help but imagine Norman Wisdom saying it. The former Leeds chairman could do with a laugh at the moment as he is fed up with abuse from Cardiff supporters. This is has led him to offer his resignation should the fans want it. Ridsdale told BBC Wales that he feels he is being driven out by fans who he says want Sam Hammam back in charge of the club.
“I am getting more stick for saving Cardiff City than I did when things went wrong at Leeds,” said Ridsdale. “If the fans want Sam Hammam back in charge, as many of them are telling me, then maybe they should have him.” We all know football is rife with people getting stick, but is the ‘abuse’ going too far at Cardiff or is Ridsdale being a big baby?