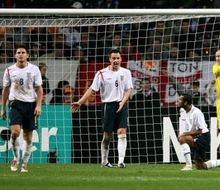 The Sun today revealed that ‘Chelsea stars spent a boozy session in a local pub just hours before [Jose] Mourinho leftâ€¦ Captain John Terry, Frank Lampard, Ashley Cole, team staff and groundsmen crammed in to the Old Plough in Cobham, Surrey, near Chelseaâ€™s training ground.’
The paper continues: ‘They spent 4Â½ hours downing pints of lager and cider, racking up a Â£250 bar bill for food and drinksâ€¦ They were joined by Israeli Avram Grant, Chelseaâ€™s director of football who has been named as the new manager.’
Good to see Chelsea’s English contingent reacting to the news by going to the boozer. These pesky foreigners still have much to learn about the game in England, clearly.