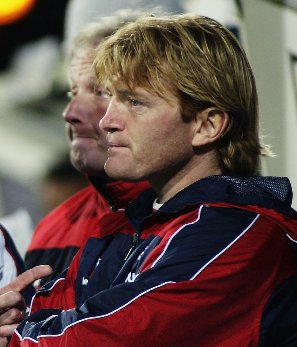 Bradford City gaffer (and world’s best beer carrier) Stuart McCall claimed that he wouldn’t “give a monkey’s” if the Football League hit his side with a fine for fielding a weakened line-up in the Johnstone’s Paint Trophy. Guess what? He’s now pleading with the Football League to let Bradford off a Â£5,000 fine.
The League reckon the Bantams boss picked a weakened team for a recent Johnstone’s Paint Trophy match at Doncaster – but McCall has dispatched a five-page dossier to state his case. “We were told prior to the game we would be getting a letter from the League asking us to explain every team selection. We had five genuine injuries, so we rested only two players.” Bradford were subsequently hammered 5-1.

McCall said “I’m having to play people who are carrying little injuries and we picked up two more with Barry Conlon and Kyle Nix. The league want fairness and fair play. But when the draws are made they should pick one team out for a bye and whoever they’ve got to play on the weekend should also be exempt. We’ve got three away games in a week while (Saturday’s opponents) Lincoln have had six days off – there’s no way it’s fair what we’re doing.”
It seems odd that the Football League should fine Bradford if McCall’s statement is true. Now money is playing a bigger role in football than ever, are we seeing the death of the club tournament?