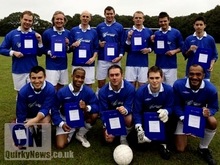 Great story this. The players of Lynam Athletic, who play in the Birmingham Coronation League Alliance Division 3 â€“ and last season finished bottom â€“ have all changed their names to those of world stars, and it seems to be having a positive effect. It’s the brainchild of player-manager Cafu (aka Dan Branch, 29), dreamed up over a pint in their local pub, inevitably:
‘We hope that the name change will give us a bit of inspiration to go on and improve this season and so far we haven’t done too badly,’ said Cafu/Branch.
Other stars in Lynam’s squad include Petr Cech, Fabio Cannavaro, Stevie G, Kaka and Ronaldinho. Their strikers are Ruud van Nistelrooy and Thierry Henry. Not a bad line-up, eh?
This begs the question: if you could change your name by deed poll to that of any world football superstar, and have his name on the back of your shirt, who would it be? I think I’d go for Gennaro Gattuso, just ’cause I like his terrier-like qualities. Who would you go for?