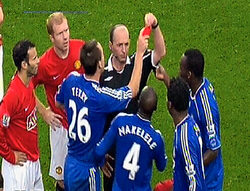 I always thought Steven Gerrard should have been made captain of England, and John Terry’s increasingly shameful behaviour only reinforces that opinion. When JT tried to snatch the red card from ref Mike Dean’s hand during Sunday’s showdown between Man Utd and Chelsea at Old Trafford, he crossed the line. Terry deserves at least a three-match ban for this action, which was the tip of the iceberg as far as his bullying of refs goes. He seems to think that because he wears the captain’s armband he has the right to rant and rave at every decision that goes against him, but instead he comes across a graceless thug.

The Daily Mail reports that Terry faces a ban for attempting to snatch the red card â€“ shown to John Obi Mikel â€“ from Dean’s hand, and quite right too. No doubt some kids watching Terry will now repeat his actions, thinking that it’s quite alright to bully the ref if the England captain does it too.
Right, that’s enough high-horsery for one day, but honestly, I have no time for Terry these days.
Do you think he should pick up a ban for this?