Every Tuesday throughout the season, Pies will publish its Player Power Rankings, a top 10 list of the hottest footballers in the Premier League, based on form, influence and subjective stuff like, er, how much we like their hair.
Here’s how the rankings table looks in its second week (with last week’s position in brackets)â€¦ 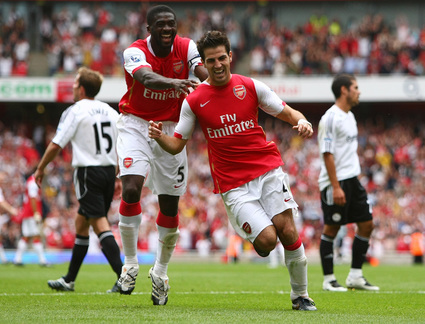 1 Cesc Fabregas, Arsenal (1)
Yep, Cesc Fabregas is still the most powerful player in the Premier League â€“ and look how delighted he is to discover the news! He topped the Power Rankings last week, and after another string-pulling performance against Derby, he’s still the main man â€“ and, unlike last season, he just can’t stop scoring. Who can knock him off his lofty perch?

2 Emmanuel Adebayor, Arsenal (New Entry)
The New Kanu suddenly looks like a proper player, after terrific showings against Spurs and Derby. In such good form that he’s keeping Robin van Persie out of Arsenal’s first team, although I’m sure Adebayor’s departure in January for the African Cup of Nations has something to do with Arsene Wenger’s selection policy.
3 Jose Reina, Liverpool (5)
Still yet to concede a goal in open play in the league this season (correct me if I’m wrong, but I think I’m right). The man is a rock.
4 Gael Clichy, Arsenal (4)
Continued his rich vein of form with another lively performance against hapless Derby. Undoubtedly has the potential to be a better player than Ashley Cole. Wenger gets it right again.
5 Nemanja Vidic, Man Utd (7)
Vidic goes up a couple of places after Man Yoo’s clean sheet against Chelsea. Which Prem manager wouldn’t want the Serb in their team? He’s now one of the first names on Fergie’s team sheet, if not the first.
6 Jamie Carragher, Liverpool (New Entry)
Once again Carra is at the heart of Liverpool’s increasingly mean defence. No team has conceded fewer league goals than the Pool, and we have to give much of the credit to England’s most redoubtable centre-back for that. 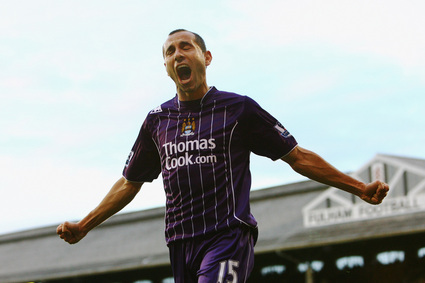 7 Martin Petrov, Man City (New Entry)
Was close to making the inaugural Top 10, and now the Bulgarian midfielder (pictured above) deservedly makes his first appearance, thanks to a two-goal, man-of-the-match showing at Craven Cottage on Saturday. Petrov has played pretty well in most City games this season and looks to be another shrewd Sven signing.
8 Charles N’Zogbia, Newcastle (New Entry)
Terrific down the left flank in Newcastle’s 3-1 win against West Ham. N’Zogbia is beginning to fulfil his immense potential and is a welcome new entry into the power rankings.
9 Mathieu Flamini, Arsenal (New Entry)
Flamini rarely troubles the headline writers, but he has been excellent for Arsenal so far, and has teamed up really well with Fabregas. Yet another young Gunner who seems to have flourished in a Thierry Henry-less environment.

10 Patrice Evra, Man Utd (New Entry)
United don’t miss Gaby Heinze one bit, and it’s all down to Evra, who is the perfect modern left-back: tenacious, quick, athletic, committed, brave and more besides. Remember when we all scoffed at Fergie’s double signing of Vidic and Evra. Once again, the Human Hairdryer has proved us very wrong.