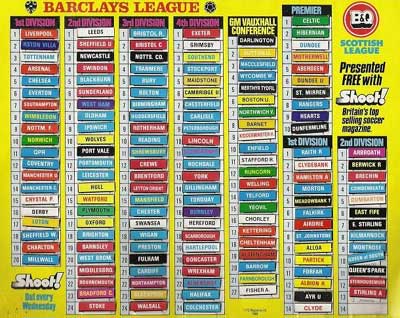 Remember buying copies of Shoot and Match and giddily flicking through to pore over new kits and footy news? Salivating over your League Ladder (as pictured) and proudly keeping it correct with every result? Well, as you grow up, you leave those mags behind in favour of… well… Pies and the like. With that in mind, you may be thrilled to learn that Shoot is still knocking about and is all ready for a relaunch with a new look and features.
The new editor, a chap called Frank Tennyson, has moved up through Shoot’s ranks and with the new look mag has created a new character called Shooty who will guide readers through the 38-year-old title which has seen its circulation decline from nearly 120,000 in 1996 to 33,455. Shame that. Still, there’s loads of new features to kick start a comeback for Shoot.

New sections include interviews in which readers ask their own questions, how-to pages and “jaw dropping facts”, along with activity features, jokes, posters and pictures. IPC Inspire (the folks who make it) said the new magazine was the result of months of editorial research and development.
The first issue of the new-look Shoot, which began life as a weekly and switched to a monthly in the late 1990s, is out today. Buy one for your kid brother or sister… and sneakily read it yourself.