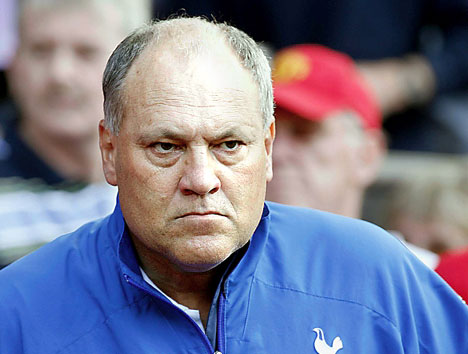 Martin Jol, currently caretaker manager of Tottenham Hotspur, has had a tough time of it lately. The fans love him and don’t want him to go, but boo him when he substitutes a player. Even though they went on to win the game. The chairman doesn’t like him and keeps asking just about everyone in the world if they fancy being Spurs manager. Jol, it seems, is not a popular boy.
However, the Tottenham manager is showing great tenacity in the face of this unjustified pap and has claimed that it would be a mistake for the Tottenham board to end his tenure at White Hart Lane. Jol told BBC Radio 5live: “The fans know how difficult it is if they change management again, they know you could easily go back for years. I hope people are realistic – you can get anyone in the world to come, but to do better you must finish fourth.”

Jol continued: “The speculation isn’t a nice position to be in, but I can’t do anything about it. The continuity is important – we were fifth two years in-a-row, I don’t think anybody else could do any better. The continuity of the club is important and we did that here with my staff over the last couple of years. We won a lot of points, had nine wins in Europe and got back into Europe via the league, which probably didn’t happen for 25 years or so. So the fans realise and they appreciate my work and that is a good feeling.”
What people seem to forget all too easily that a manager needs time to stamp his authority on a side. Alex Ferguson had quite a few dodgy seasons at Old Trafford before taking the Manchester United team to new heights. On a smaller scale, Bolton Wanderers had to narrowly avoid relegation before Sam Allardyce started to push the Trotters into the ‘next level’. It would seem that Jol isn’t being given the time and should he leave, could take Spurs back to being the inconsistent team that we’ve known prior to Jol. Tottenham fans need to know their place and the board need to try and keep a grip on reality. Success takes time. [Mof Gimmers]