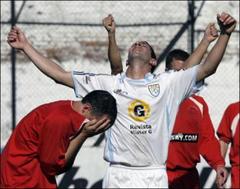 In a match that could be mirrored by the Rugby World Cup final, Argentina took on England in the final of the Gay World Cup at the end of last month. Unfortunately, the result was not what we wanted. Argentina’s Los Dogos defeated English title-holders Stonewall FC 1-0 in Buenos Aires.
With their victory, Los Dogos, who are named after an Argentine dog breed, automatically qualified for the 2008 tournament, which will be held in London.
‘The people supported us and I hope it’s always like this,’ said Dogos coach Nestor Gammella, 51, after the final held at the Defensores de Belgrano stadium. ‘We beat the world champions and we are happy.’
Phew, I managed to get through that post without any reference to a ‘backs-to-the-wall’ performanceâ€¦ Doh!