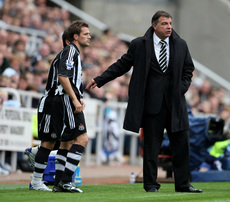 Little Michael Owen is prepared to defy club manager Sam Allardyce by passing himself fit, against the Newcastle medical team’s advice, for England’s Euro 2008 qualifier against Estonia this Saturday.
Big Sam, understandably, is unhappy with Owen’s country-above-club stance: ‘I don’t know whether two games in such a short space of time is right,’ the Newcastle boss said in a pithy statement. ‘Michael isn’t qualified to do anything other than play football, so he can’t ignore the information he’s given by our highly-qualified medical staff and me as his manager.’

Owen insists that he will only take the advice of the surgeon who operated on his hernia in Munich last Friday: ‘Could I play against Estonia? I don’t see why not,’ he told reporters. ‘I will listen to the surgeon and not anyone else because she knows what she is talking about. I don’t see why there was any risk in me playing on Sunday.
Hmm, anyone sensing an ‘I told you so’ moment when Owen is crocked against Russia?