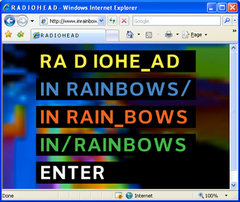 Today Radiohead released a new album, In Rainbows, that has no fixed price – you, the consumer, decide how much you want to pay for it. It’s a remarkable ploy, and one that only a major-league band like Radiohead could get away with, but could it work for football?
Currently one can expect to pay anything between Â£25-Â£50 for a standard seat in a Premier League ground, which can seem like you’ve been massively overcharged after 90 minutes of goalless tedium.
So if the people who run football clubs decided to do a Radiohead and let you pay what you wanted to watch a match, how much would you pay? Leave a comment and let me know. It would be interesting to see if Man Utd fans, say, are willing to pay more than Middlesbrough fansâ€¦
Download Radiohead’s new album, for as little or as much as you want, at the In Rainbows website