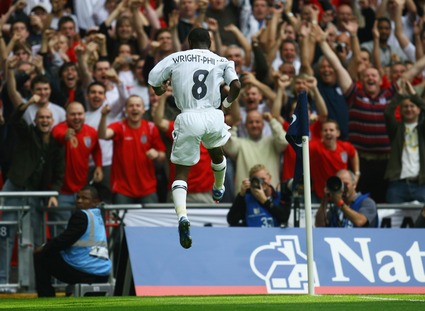 What’s this? A new, untried formation on a plastic pitch in a crucial away qualifier? Yes, it can only be the latest episode of the soap opera that is Team England. Just as the Croatia away game was not the time to experiment with a 5-3-2 formation, I don’t believe that Wednesday’s Euro 2008 qualifier is the time to go with a 4-3-3 formation, purely to accommodate Frank Lampard in the midfield but without dropping Gareth ‘Every time I play for England I get the man of the match award’ Barry. England has won five matches in a row playing 4-4-2. Mere coincidence, or perhaps a sign that England’s players like playing that formation? Hmm, I wonderâ€¦
In the words of Don Logan, No no no no no no no no no! No no no no no! Joe Cole and Sean Wright-Phillips give us width and balance â€“ if Stevie Mac goes with a midfield of Barry, Gerrard and Lampard, Barry will simply be forced out onto the left, and we’ve already seen how comfortable and effective he is in the middle of the pitch. Either that, or Barry will stay in the middle, flanked by Stevie G and Lamps. I’m not happy about either prospect.
Photo Getty Images

There also rumours that Micah Richards will move to centre-back if John Terry isn’t fit to play. Did McClaren not see how well Richards and SWP linked? Which means we could end up with a back four that reads, from left to right: Phil Neville (in for Ashley Cole), Rio Ferdinand, Micah Richards, Luke Young.
That looks decidedly patchy to me â€“ surely it would be best to keep Richards at right-back and bring in Joleon Lescott at centre-half? Young is not an international-class player. Neither is Phil Neville, but of course you can’t blame McClaren for Ashley Cole’s injury.
I hope this is all some smokescreen, announced by The Sun. I hope McClaren has the courage to stick with a winning formula. Do you agree?