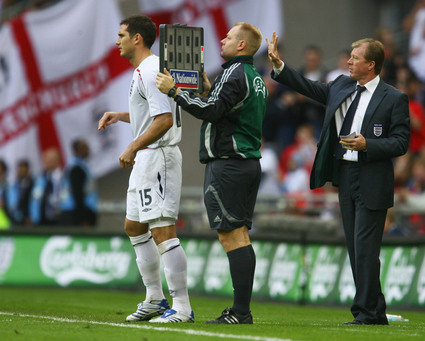 The Sun’s ‘exclusive’ story that England would recall Frank Lampard in a 4-3-3 formation for tomorrow’s Euro 2008 qualifier against Russia would appear to be bollocks. It’s no great surprise that The Sun should get it so wrong; they took a gamble and got it wrong. It’s more of a surprise that Steve McClaren has grown a full set of balls and decided to keep Lampard out of the starting XI.
Gareth Barry keeps his place, and rightly so. John Terry will discharge himself from hospital, throw away his crutches and play in place of Sol Campbell, alongside Rio Ferdinand, with Joleon Lescott coming in for the crocked Ashley Cole at left-back. Apart from that, the team stays the same as for the Estonia game.