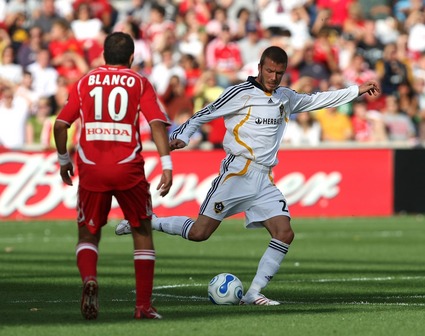 David Beckham is not going to the play-offs. LA Galaxy needed to beat Chicago Fire in their final match of the season; they didn’t. A goal by the Fire’s John Thorrington â€“ who, ironically, used to play for Man Utd at the same time as Beckham was there, albeit in the youth team and reserves â€“ put the cap on the Galaxy’s Jekyll & Hyde season. Becks came off the bench in the 58th minute but didn’t make much of an impression on the game. His coach, Frank Yallop, said: ‘You could tell he was tired at the end of the game. He had some nice long passes and his free kicks are always dangerous.’ Faint praise indeed.
The Fire progress to the play-offs, where they will play DC United, one of the strongest teams in the MLS. The other match-up in the East is: New England Revolution vs NY Red Bulls. In the Western semi finals, Chivas USA meet KC Wizards, and Houston Dynamo take on FC Dallas.