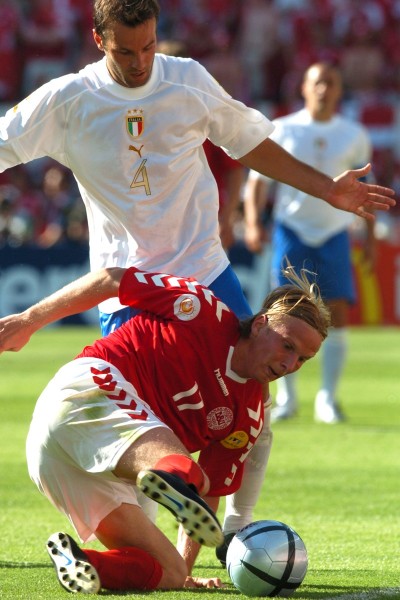 Poulsen gets down and dirty – where he likes it

As expected, Danish hardman Christian Poulsen has signed for Liverpool, for a fee reported to be in the £4.5m ballpark.

This means Javier Mascherano has surely had his chips at Anfield, with Barcelona now a more likely destination than Inter. Reports claim Liverpool wanted anything up to £20m for the surly Argentine, but I expect now that Poulsen is in the bag, Uncle Woy will accept much less than that from the Catalan shit stirrers – perhaps around £12m.

Okay, Masch is clearly a bit of a pain in the arse, and his agent seems to be even more of a tosser, but he is a brilliant defensive midfielder on his day, and although Liverpool will make money out of this indirect ‘swap’, surely they will lose in terms of the strength of their squad.

That said, I suppose this is the last big gig for Poulsen, so you’d expect him to give it everything at Liverpool, whereas Masch is a bit of a moody maverick, so in terms of squad morale, it should be a major improvement.

Some pics of Poulsen in his pre-Liverpool days, for the likes of Denmark, Sevilla, Schalke and Juventus: