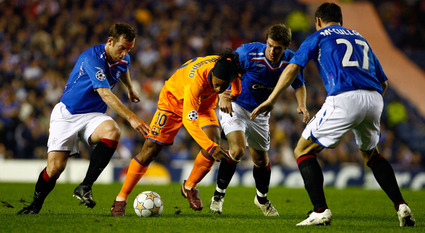 I predicted a 1-1 draw and wasn’t too far off. This is a terrific result for Rangers, who were outplayed for significant periods of the game by the stellar cast of Barca (Messi, Henry and Ronaldinho all came close to scoring) but ultimately deserved a point for their discipline and calmness under pressure. In the end, Barca were happy to run down the clock and settle for a draw, despite this being a match they could easily have won. Kudos to Walter Smith, Barry Ferguson and co.
Highlights after the clickâ€¦