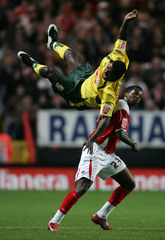 A packed schedule of Championship fixtures last night, with a few results standing out:
Plymouth Argyle earned a great 2-1 away win at Charlton (pictured, left), which moves the in-form Pilgrims above Athletic in the table, into fourth spot. The match was a feisty affair, with ten bookings, but that didn’t bother Argyle boss Ian Holloway, who was delighted with his team’s fighting spirit: ‘I loved the work ethic, we were never say die and I am very proud of this football clubâ€¦ People don’t take me seriously but I care about people with a passion and this club is going places.’
Get in Ollie!

Elsewhere, Watford battered Coventry 3-0 to move nine points clear at the top of the table. Marion King was man of the match by a mile, scoring one and setting up the Hornets’ other goals, for Adam Johnson and Darius Henderson; who knows, if Aidy Boothroyd had enjoyed the services of a fully fit King throughout last season, maybe Watford would be still playing in the top flight?
There were also wins for Stoke City (a fine 3-1 victory at Crystal Palace), Burnley, Ipswich, Sheffield Utd, Scunthorpe and West Brom. Preston North End drew 0-0 at home to QPR. Rangers remain rooted to the bottom of the table.