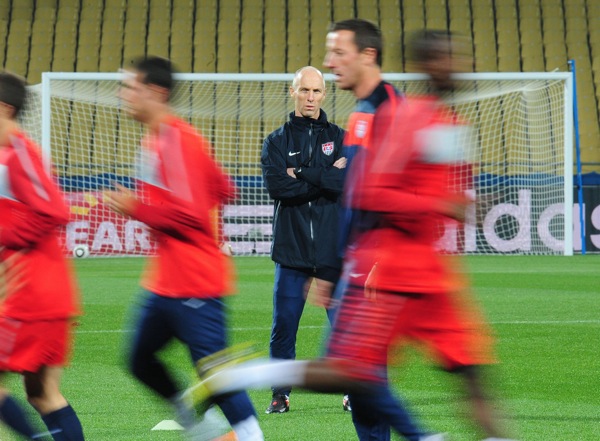 I’m hearing whispers that scary Navy SEAL-type man Bob Bradley – who may or may not be part-machine – has stepped down from his position as head coach of the US national team. We’ll see.

If true, that would be the first part of the 2+2 sum which sees him end up in Martin O’Neill’s old office at Villa Park. Not that Bradley needs an office, because he spends all his time out on the training ground, arms folded, mad stare fixed, daring his players to f*ck up.

As I said, I have no idea if Bradley has indeed quit, but of course his nationality has seen him linked to a club owned by a fellow Yank – not to mention his work at the World Cup this summer, when he led the States to the top of its (terrible) group. Okay, he made a few team selection errors along the way, but at least he can think on his feet, and his use of game-changing substitutions is well known. Plus he has admitted he wants to coach in Europe.

In conversation with Two Footed Tackle‘s Chris Nee at Wembley this week (Chris is a Villa supporter), he bemoaned O’Neill’s inability to change the course of a match, to think on his feet. Bradley outscores the Northern Irishman on that count, surely.

So stick a few quid on Bradley – I suspect he will be Villa’s next gaffer. Bet on Michael Bradley to join sharpish too.