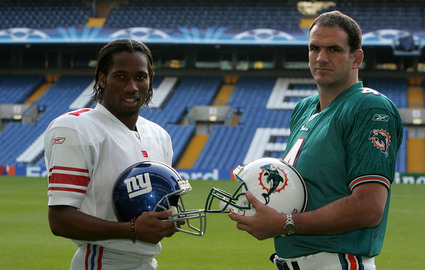 Didier Drogba and former England rugby union captain Martin Johnson pose at Stamford Bridge in NFL uniforms to promote the match between the NY Giants and Miami Dolphins, which will be played at Wembley Stadium on October 28th.
Hmm, there must be a good caption or two in thereâ€¦
Photo Christopher Lee/Getty Images