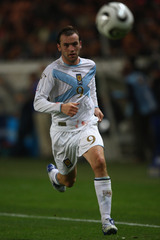 Scotland have risen one place to 13th in FIFA’s world rankings, their highest position since the rankings were introduced in 1993. The Jocks are now just two spots behind England who dropped down to 11th on the back of that defeat in Russia.
Many Scottish fans â€“ and no doubt some English fans too â€“ would argue that Scotland are currently a better team than Stevie Mac’s beleaguered England. But how many of Scotland’s players would get into an England/Scotland combined XI?
As far as I can see, only one or two Scots would stand a chance: In goal, Craig Gordon would definitely get the nod ahead of Paul Robinson. Barry Ferguson might stand a chance of securing a spot in central midfield, but you have to remember that he didn’t make it at Blackburn, and he would have to be picked above the likes of Gerrard, Lampard, Hargreaves, Carrick and Barry. I’d put Ferguson on the bench, but not in the starting line-up. The only other players I’d take a look at would be Everton’s James McFadden and Alan Hutton of Rangers. McFadden’s not even a fixture in Everton’s first team, although I concede that his recent form for Scotland has been superb. Hutton has a great future, but I wouldn’t take him over Micah Richards. Both could make the subs’ bench though.

The honest truth is that you’d almost certainly select Craig Gordon plus ten English outfield players. However, that doesn’t mean I’d pick England to beat Scotland if the two teams were to meet right now. I think it would be very close; either way, it’s surely about time that Scotland were invited to the new Wembley.