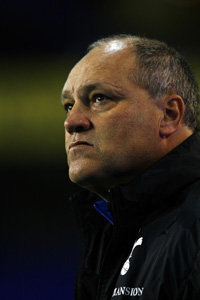 The seasonâ€™s longest running managerial soap opera is finally over â€“ Martin Jol has quit as Spurs manager after his sideâ€™s 2-1 loss at home against Getafe in the UEFA Cup.
Apparently, Jol attended his resignation before the match but failed to go out on a winning note as the Spanish side came from behind courtesy of yet more woeful defending. News of his departure filtered down to the White Hart Lane crowd who chanted, â€œStand up Martin Jol,â€ in appreciation of his three years at the club.
There are rumours that a severance package has already been agreed and Sevilleâ€™s Juande Ramos is set to take over, possibly with Gus Poyet as his number two. Spurs fans still chanted Jolâ€™s name after the game and sang in protest against chairman Daniel Levy â€“ who has essentially forced him out by courting other managers.
Has Jol left with his dignity or, with one win in ten all season, has he jumped before he was pushed?