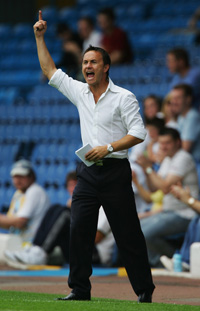 The FA has charged both Dennis Wise and referee, Danny McDermid, for swearing at each other during a game between Leeds and Gillingham back in September.
We can imagine Wise spitting and snarling expletives from around knee height like a psychotic Scrappy Doo â€“Â who was fined Â£5,000 and received a three-match touchline ban for having a go at McDermid at half-time.
But, it was more surprising that the referee bit back with some choice words of his own at the end of the game â€“ although if anyone could enrage you we imagine Wise could. Has McDermid let himself down or should referees be allowed to answer back in the language theyâ€™re being attacked with â€“ itâ€™s a manâ€™s game after all?
Or, you could just tell us what youâ€™d like to say to Dennis Wise if he got all â€˜Napoleon Syndromeâ€™ up in your face â€“ keep it clean if you can.