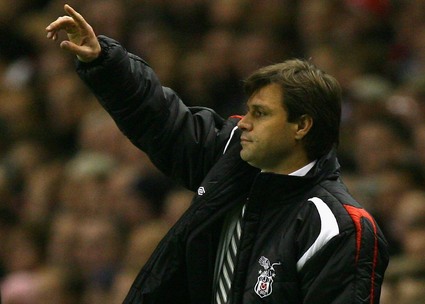 The hacks at The Guardian obviously read a little wider than us. So while perusing English-language Turkish newspaper Today’s Zaman they uncovered a potential reason for Besiktas’ poor showing against Liverpool last night. The paper revealed bitterness about Besiktas’ defeat to Fenerbahce in the Istanbul at the weekend, moaning about “hair-pulling, pushing, shoving, rough tackling and provocation by both sides, and above all, terrible refereeing decisions. It will go into the record books as one of the worst-officiated Istanbul derbies in the Turkish soccer league since its inception in 1959. There were so many obvious errors, so many wrong calls and so many non-calls that it would be impossible to enumerate all of them.”

Besiktas president YÃ½ldÃ½rÃ½m DemirÃ¶ren took things further. He said: “[Referee Ãsmet] Arzuman, who virtually caused a scandal on the pitch in the first 30 minutes with his never-ending one-sided calls, must give up officiating starting from today! As a protest, we have decided to play our upcoming game against Sivasspor with our youth team. We also ask our fans not to come to this game. If our sponsors want to cancel their contracts so be it. We are fed up with bad calls. These calls have already cost us two crucial derbies! If Mr Arzuman decides not to resign, we will reconsider our position and probably step on the field with our youth team in the following games as well.”