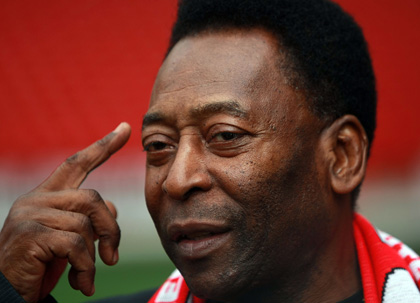 Every so often the greatest footballer on earth will come out with a curveball statement straight from the Sepp Blatter school of thought.
Heâ€™s claimed Nicky Butt was the best English player in the World Cup, insisted an African country would win it before 2000 and named Michael Owen as his favourite Man United player. And now he wants to break down more barriers in sport by getting rid of the defensive wall at free-kicks.
Could Godâ€™s gift to football have come up with an ingenious way of spicing up the game or are these the mutterings of a man losing the race against age?

“There is one rule I have debated at FIFA. As a forward, the wall – I don’t know why they have not banned the wall from the game.
“The forward gets the ball from the midfield, dribbles for one-two or passes three or four players but when you get close to the goal, the last defender makes a foul.
“After you have passed all the players, one guy makes a foul and then you have the whole team in the wall against you again. It is not fair,â€ he said.
What with today’s Predator boots, swerving balls and free-kick specialists it would no doubt increase the spectacular goal count, although if it wasnâ€™t for the wall who knows where Cristiano Ronaldoâ€™s free-kicks would end up.
But, with the long-range equivalent of a penalty being awarded for fouls near the goal would it just encourage even more diving and cheating to win a free-kick?