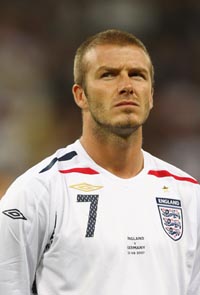 So Steve McClarenâ€™s little jaunt to La-La land wasnâ€™t just a short holiday on the FAâ€™s expense account as the England manager has named David Beckham in what could be his final squad for our last Euro 2008 qualifying game against Croatia.
Becks has made a comeback of Hollywood proportions to make it back into McClarenâ€™s thoughts as he desperately tries to fulfill his dream of making it to a 100 England caps. But the irony is that he could come up one short.
Beckham is currently on 97 caps with two games to play, including a friendly against Austria, taking him to 99 before Englandâ€™s fate is decided. If we donâ€™t qualify itâ€™s unlikely the new regime will look at an ageing, injury prone player seeing his career out in the US.
It seems a bit unfair â€“ would anyone deny the prodigal son the chance to go a ton up, even if itâ€™s only a cameo appearance in a future friendly?
Click through for full details of the squad