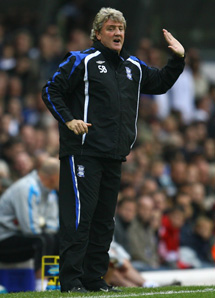 Premier League strugglers Wigan are looking to get a Brucey bonus by tempting Birmingham manager, Steve Bruce, to rescue the club from relegation.
The Lactics have made an official approach to install him as their new manager, although itâ€™s been initially rejected by the Brummie board. However, itâ€™s claimed that co-owners Davids Gould and Sullivan may change their stance after discussions today.
Bruce has been with the club for six years but thereâ€™s uncertainty that he will stay once new owner, Carson Yeung, takes over the club. Heâ€™s already admitted that thereâ€™s no guarantee of funds being made available to strengthen his underachieving squad in January.
The former Manchester United star is probably kicking himself for not taking the Newcastle job three years ago and with no idea if heâ€™s part in Birminghamâ€™s future plans he could be forced to make a reluctant decision.
Birmingham are only three points above Wigan in the Premier League table â€“ is the time right for Steve Bruce to move on and is he the man to save Wigan from the drop?