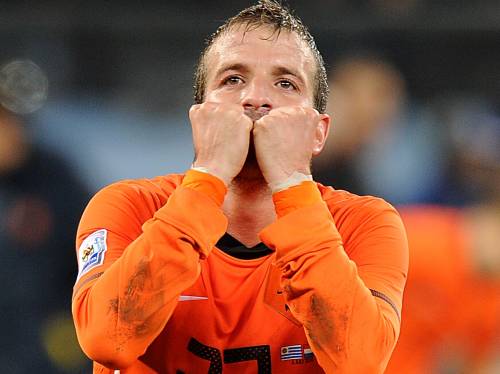 TOTTENHAM are still sweating on confirmation as to whether their last-ditch attempt to sign Rafael Van der Vaart from Real Madrid was successful, and there’s no official word from either club as yet.

“It’s still dragging on. We are just waiting to see whether it’s all gone through. We are waiting for clearance. The chairman and the secretary are dealing with it, there is nothing more I can do now.”

Redknapp also revealed that he only became aware of Van der Vaart’s plummeting asking price hours before the transfer window closed, and that the wheels weren’t set in motion until gone 4pm.

“I think he was going to Bayern Munich yesterday for about £18million, but suddenly it became an awful lot cheaper. He is available now for about £8million. He is a quality player. He is a Dutch international and a great footballer.

For that sort of money, he is a top player and he will improve us for sure. We have made the effort, whether we can pull it off or not we will have to see.

I am hopeful. It could happen. It was a last-minute job. When I came in [yesterday] morning it certainly wasn’t something I was looking to do. He is a great passer of the ball, he is a top footballer. He will join in here and play the way we like to play, he would be a big plus for us.

He looked like he was going for £18million but then the fee came crashing down because the deadline got close. If the chairman can pull it off, I think he will have got a real bargain.”

We’ll keep you posted with any further happenings…