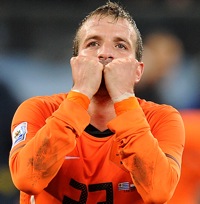 Rafael van der Vaart has revealed that he chose to join Tottenham despite a late offer from Liverpool (and not Bayern Munich, as was reported). Excellent choice, sir.

“I am going to give it my best and hopefully I will play a lot of games and be important for the team. I hope to get a lot of goals and have a lot of fun.”

VdV is also looking forward to seeing if his compatriots in the Premier League have overhyped English football.

“They were always telling me, ‘You have to come to England!'” he said.

“Now it’s happened and I am really looking forward to playing against Dirk (Kuyt), against Nigel (De Jong), against (John) Heitinga.”