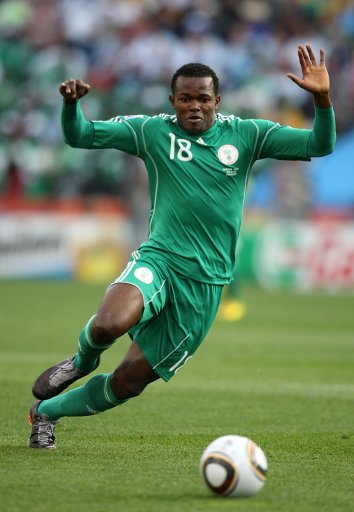 Nigerian forward Victor Obinna has revealed that he chose to join West Ham on a season-long loan from Inter Milan after a chin-wag with his national teammate Nwankwo Kanu – yes, you heard that correctly, Nwankwo Kanu is apparently still an international footballer despite being 60-years-old and made entirely of Matchmakers.

Obinna is quoted on talkSPORT.com as saying;

“I spoke to Kanu, who played for [current Hammers manager] Avram Grant at Portsmouth, and he was excited that I come here. Kanu is the king. He said many good things. He was so excited for me to come here.

He gave me some advice before signing for West Ham and told me to go for it. He encouraged me. He has played under [Grant] and said they had a very positive relationship.”

The 23-year-old then lost all sense of relativity as his brain swarmed with possible explanations for his decision to swap the Italian fashion capital for east London;

“Inter have an amazing stadium, but West Ham have a big culture and a very long history. I am going to have a nice life here.”

Don’t get me wrong, the San Siro is very impressive – but didn’t Inter win some sort of treble last season? And the scudetto the four(ish) years before that? And haven’t they amassed a running total of around 35 major European and domestic titles during the 102 years of existence?

Although, West Ham did secure the BBC Sports Personality of the Year Team Award in 1965, so fair’s fair.