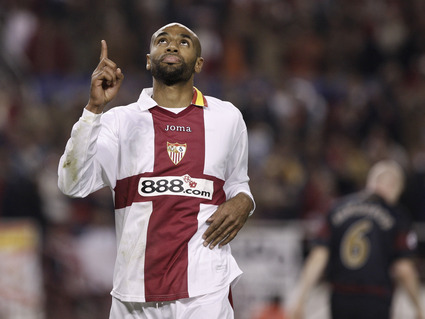 Sevilla stormed to victory despite conceding an 11th-minute goal from Eduardo da Silva. It was Arsenal’s first defeat of the season, and in a match they didn’t have to win. I don’t think it heralds a dip in form for the Gooners, who had already qualified for the next stage of the Champions League.
Seydou Keita (stunning left-foot shot after a mistake from Philippe Senderos), Luis Fabiano (great header) and Frederic Kanoute (penalty) scored Sevilla’s goals â€“Â it’s a very small crumb of comfort for Tottenham fans that an ex-Spurs player put the seal on an Arsenal defeat. Oh, and Arsene Wenger was dismissed from his technical area, presumably for constantly moaning at the fourth official. ‘I don’t know why I was sent off, I was really surprised,’ Arsenal’s naughty gaffer said.
Watch all the goals from the match after the clickâ€¦