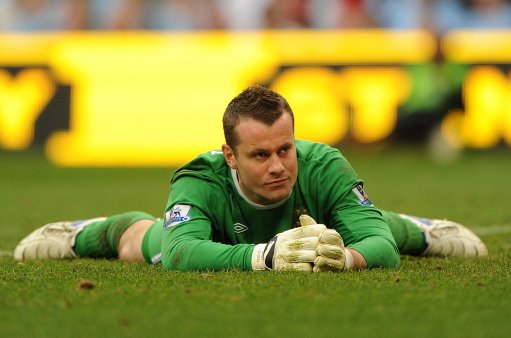 Manchester City manager Roberto Mancini has told ‘keeper Shay Given he will be allowed to leave the club in January, after losing his ‘No.1’ status to the emergent Joe Hart this season.

Given is yet to feature in any of City’s eight fixtures this season and was linked with several clubs before the transfer window shut at the beginning of the month, although no move materialised.

Speaking after his side’s 2-0 win over Wigan yesterday, Mancini said;

“I told him that he can stay but I respect his decision and if he wants to leave he can. He decided to stay here and until January he must stay here.”

I have a lot of respect for Shay and I told him the situation, I understand his frustration but I need that Shay stays here and puts in 100%.”

As inevitable as his demotion is considering Joe Hart’s sterling form for club and country, it’s sad to see a great goalkeeper going to such an obvious waste. January can’t come around soon enough.

Anyone else foreseeing a return to Newcastle?