‘I played for four years in Belgium and they hate me!’
Didier Zakora, Spurs midfielder 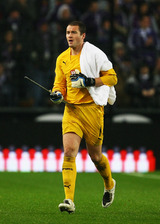 Zakora, not the most popular player in Belgium for some reason, was apparently hit by a cigarette lighter thrown from the crowd and had to receive treatment. Paul Robinson picked up a metal bar from the pitch and handed it to the fourth official after the match. As the photo shows, the bar was not exactly small.
In terms of football, Spurs did enough to guarantee qualification for the next stage of the competition, in a repeat of the 1984 Uefa Cup final, won by Spurs on penalties â€“ a Dimitar Berbatov penalty, awarded after Jermaine Jenas had been felled in the box, cancelled out Bart Goor’s 68th-minute strike. They top Group G after four games and will certainly finish in the top three of the group of five.
Watch the action after the clickâ€¦