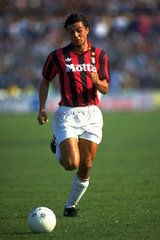 AC Milan’s indestructible captain Paolo Maldini, announced after the final of the Club World Cup (see post directly below), that he will quit at the end of the season.
‘It’s hard for someone to reach the age of 39 and still compete at the top level,’ he said.
‘In June [2008], I will retire with no regrets. Playing right now is a struggle and while I still have the odd pain, I have such fun on the pitch.’
Maldini is truly one of the all-time football greats, and a fiercely loyal, one-club man to boot. He has played for Milan since 1984, racking up seven Serie A titles and five Champions League crowns along the way. In my book he’s the greatest defender to ever play the game. To play at the very highest level for almost a quarter of a century is a jaw-dropping feat, and one that only Maldini could achieve.

Quite apart from his relentless brilliance, I’ve never, ever heard any football fan say a single bad world about him. He’s a modest, charming man, the sort of bloke you’d love to go for a couple of pints with. Or a couple of glasses of grappa, even.
Paolo, thanks for everything you’ve given the game of football â€“ you are a great man and you will be greatly missed. I hope you go on to coach the Italian national team to a World Cup victory, to make up for the fact that you never won any international trophy.
Obligatory YouTube highlights reelâ€¦