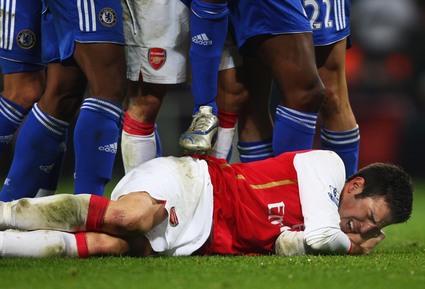 Not a classic encounter by any means; however, it was fascinating stuff between two teams who clearly hate each other. Here are three things I learned from the match:
No.1 Making William Gallas captain was one of Arsene Wenger’s unlikeliest masterstrokes. Gallas strikes me as vain, petulant and arrogant – but give him a bit of responsibility and he harnesses those traits to positive effect. By contrast, Gilberto Silva hasn’t been the same player since he was overlooked for the captain’s armband; you could argue that in turning Gallas again into a world-class player, Wenger has accidentally sacrificed the Arsenal career of his Brazilian midfielder.
No.2 Although Chelsea always miss John Terry, it’s clear who Chelsea’s most valuable player is: Didier Drogba. In eight Premiership and Champions League matches without The Drog this season, Chelsea have scored a paltry six goals. Without Drog and Terry, the Blues just don’t look threatening from set pieces and corners. And it’s been a long time since you could say that about a Chelsea team.
No.3 Arsenal didn’t beat Chelsea once during Jose Mourinho’s time as Blues manager but defeated Avram Grant’s side at the first attempt. The Jose curse is lifted!
Watch match highlights, including William Gallas’s winning goal