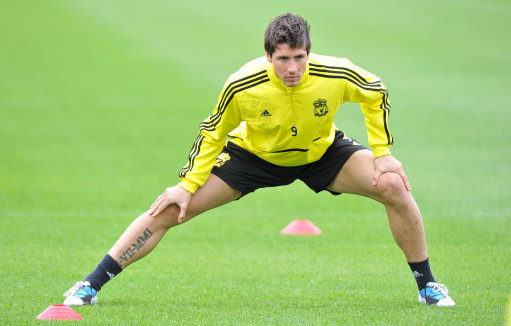 Stop me if you think that you’ve heard this one before. Barcelona defender Gerard Pique has claimed that Fernando Torres is ’embarrassed’ at having to play for Liverpool, and that a move to the Camp Nou would ease the striker’s worried mind.

Pique is quoted in The Daily Star as saying;

“There is no way this can go on for Nando. It’s just impossible. I spoke with him before he committed to Liverpool and he told me he wanted to win things there, but if the club didn’t invest and show real intent, he would be forced to leave.

It’s really embarrassing for Nando to play in a team of that quality. You would not see Messi or Rooney playing in the Europa League, so there is no reason why Nando should be playing there.”

Now, first of all it’s got to be said that I highly doubt Pique actually said any of this – in this modern era of media training and copy-and-paste remarks, the quotes are surely far too insulting and controversial to be genuine – although saying that, Barca (and Pique himself) have an awful lot of previous when it comes to ‘urging players’, as any Arsenal fan will tell you.

It would appear that, after only temporarily sating their relentless need for fresh meat by finally inducting Javier Mascherano and David Villa into the blaugrana boy’s club this summer, the cut-price jokers of European football are hungry once again.