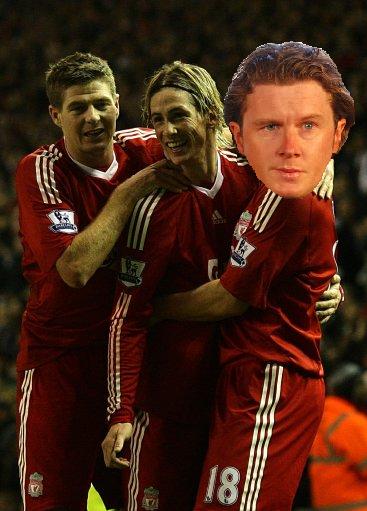 Former Liverpool winger Steve McManaman has admitted that he fears star duo Steven Gerrard and Fernando Torres will jump ship in the January transfer window, if the club remains under it’s current rootin’ tootin’ ownership and the players themselves don’t begin to show signs of improvement.

Speaking to the Daily Mail, McManaman told of his mounting concerns;

“No matter what happens there will be questions again. Torres is not happy, Gerrard is not happy. Their body language is not good.

If Liverpool are 14th would you stay? Would I stay? If it is the same scenario, the same owners and the same predicament I can see their best players wanting to leave and wanting to play in Champions League football. They need to be playing in the best teams in the best leagues available.”

Although the point he is making is valid enough, the fact that McManaman left Anfield under a fairly bottom-heavy cloud by allowing his contract to tick down – coupled with the fact that I’m fairly sure he’s gone on record as being an Everton fan – will, rightly or wrongly, almost certainly detract most of the credibility from his statement.