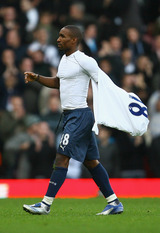 1 Jermain ‘third-choice’ Defoe has been told he can leave Spurs by boss Juande Ramos. However, the ‘ambitious’ (rolls eyes) English striker wants to stay and fight for his place/hope that Dimitar Berbatov is sold. Move on Jermain – they DON’T WANT YOU! I’d like to see Defoe team up with John Carew at Villa, with Ashley Young and Gabriel Agbonlahor on the wings. Daily Telegraph
2 Bolton have rejected a bid from Chelsea for Nicolas Anelka. Avram Grant showed his hand too early, in my opinion. It’s clear that Gary Megson would be happy to cash in on Anelka, but he probably wants Man Utd to get involved in a bidding war for the Frenchman’s services. F365

3 Juventus boss Claudio Ranieri has admitted he’d like to sign Momo Sissoko, who is out of favour â€“ and form â€“ at Liverpool. The ex-Chelsea boss said: ‘Sissoko is a player I like a lot and I know him wellâ€¦ He is a great player. I have had the pleasure of coaching him at Valencia.’ The Sun
4 According to the Daily Telegraph, ‘Barcelona are ready to scupper Arsenal’s hopes of signing Jussi Jaaskelainen after the Spanish giants made a move for the Bolton goalkeeper.’ Arsene Wenger has made the Finnish international his first choice to replace Jens Lehmann.
5 The Daily Express â€“ the best newspaper in the world, folks â€“ reports that ‘Steve Bruce is expected to complete his first signing as Wigan boss on Monday with a Â£1million move for Honduran midfielder Wilson Palacios close to completion. Bruce had brought Palacios to St Andrews as Birmingham boss at the start of the season and has been keen to renew his interest in the 23-year-old.’