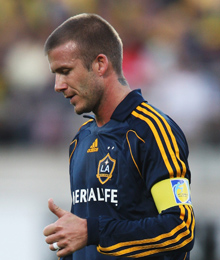 Old Goldenballs is still sweating over his inclusion in Fabio Capelloâ€™s inaugural England squad, which could earn him the 100th England cap heâ€™s been chasing. Most people thought it would be a foregone conclusion that Beckâ€™s former manager would give him an international swan song out of respect â€“ but thatâ€™s not how Fabio rolls.
The Italian is concerned by Beckhamâ€™s fitness as he hasnâ€™t played a competitive game since November, although Arsene Wenger has apparently been impressed by Beckham while heâ€™s been training with them. And, thereâ€™s also the chance of alienating players like Bentley, Wright-Phillips and Lennon who surely have longer-term futures.
But, weâ€™ve seen one manager leave out Becks as a statement before and be left with egg on his face. Does Beckham deserve inclusion even if itâ€™s the last game he plays for his country?
Click through to vote and let us know your thoughts