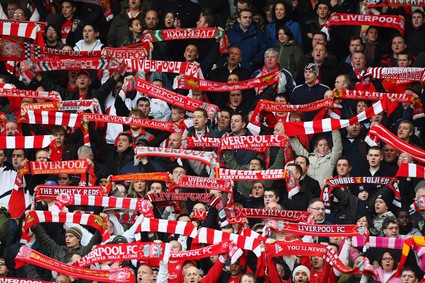 I had a good laugh when I read the news that Liverpool fans are set to launch a plan to buy their club from George Gillett and Tom Hicks.
A group calling itself Share Liverpool FC wants to recruit 100,000 fans from around the world, with the aim of raising Â£500m to purchase the club from the pesky Yanks and also build a new stadium.
Is there anyone more afflicted with delusions of grandeur than your average Liverpool fan? They should leave the running of the club to the money men in suits who know about such things and stick to what they know best, namely singing ‘You’ll Never Walk Alone’. Such self-importance is embarrassing, if predictable.

What have Hicks and Gillett done to ruin Liverpool fans’ precious club anyway? Nothing more than the average owner of a Prem club, as far as I can see. If anything, the blame for Liverpool’s current malaise has to lie with the manager and the players – Rafa Benitez has been given plenty of cash to strengthen his squad, but apart from Fernando Torres you have to question the wisdom of his purchases.
A fan-share system may work at Barcelona but that is a much, much richer city, and Barca is a much bigger club (sorry Reds, but it is). Barcelona is a one-club city, too – they have the support of the entire community, which Liverpool don’t. Plus, Liverpool fans don’t have as much cash to splash. Your average Barca fan is much better off than your average ‘Pool supporter.
I agree that we have to look at the way in which foreign billionaires can come in and buy English clubs with their loose change, but this is communism at its most hare-brained. It’s a romantic pipe dream and it won’t happen.
The craziest part of this scheme? The notion that you could ever get 100,000 Scousers to agree with each otherâ€¦