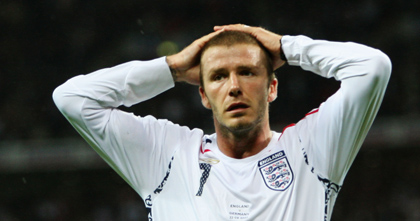 It looks as if David Beckham will have to wait a little longer to reach the 100th cap milestone heâ€™s been chasing â€“ The Daily Mail reports that Fabio Capello has decided not include him in his first England squad. (UPDATE The BBC is saying the same thing too so it looks like it’s true, Ed.)
Thatâ€™s likely to upset more people than just Goldenballs himself as a staggering 86% of Pies readers voted for him to be included in our recent poll.
The tough Italian is said to have broken the news to Beckham by phone last night, leaving him on 99 but not necessarily out â€“ as Capello assured him he would still be a part of his plans for the future.
The managerâ€™s reasoning is that, despite training with Arsenal in recent weeks, Beckham is still not match fit, which would be unfair on players including Bentley, Wright-Phillips and Lennon who have been playing week-in, week-out.
Heartbreak for now but Capello has told Beckham that he will pick him again as long as he is fit and playing regularly in the MSL for LA Galaxy.
Let us know if you think Capello has made the right decision.