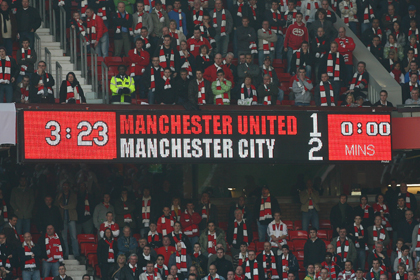 From City fans impeccably observing the minuteâ€™s silence to United losing the game 2-1, yesterdayâ€™s Manchester derby didnâ€™t quite turn out how most of us expected.
The world waited to see if the memory of the Munich air disaster victims would be respected, especially after the silence was cut short during the recent England game. And, to their credit, the City fans were outstanding without a single murmur from the crowd â€“ although there were some fireworks let off outside the ground.
We canâ€™t help wondering if a few heckles from the crowd would have inspired United to raise their game and in the end they went out with a whimper. Let us know if you think that this could have been the defining game in the Premier Leagueâ€™s title race.

With the double done over United this season, Cityâ€™s Seven Goran Eriksson now holds a 100% record over Fergie. Itâ€™s the first time they have beaten United at Old Trafford in 27 attempts and if Arsenal can overcome Blackburn tonight they will be five points clear at the top of the league with only 12 games remaining.
With two draws and a loss in their last four games, United are officially going through a blip at the moment and the title race is now out of their hands. The club face Arsenal in the FA Cup next week where a win could reclaim a psychological advantage while a loss could leave United with only the Champions League to play for.
Both teams should be expected to win their next four league games against lesser opposition with March 23rd the next time that the so-called big four face each other again â€“ United play Liverpool while Arsenal are against Chelsea.
Since United also still have to play the Gooners at home before the end of the season there is still hope for them if they react to their latest defeat with a decent run.
Let us know which way you think Unitedâ€™s season will go after their historic loss.