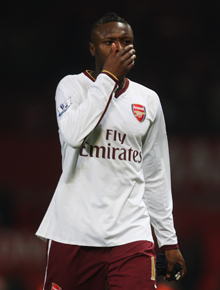 Arsenal exposed themselves as bad losers again after their FA Cup slaughtering at the hands of Man United. Wenger complained about the state of the pitch, Emanuel Eboue was sent off for a late challenge on Evra and several players had a kick at Nani for his impromptu ‘seal impression’.
It was Gallasâ€™s off the ball attack on Nani that received most attention with a red-faced Fergie insisting the Arsenal captain should have been sent off â€“ unsurprisingly, Wenger missed ze incident.
But, the FA have just announced that Gallas will escape disciplinary action, saying, â€œThe referee is not satisfied that the video footage showed violent conduct and no action will be takenâ€.
Weâ€™re not sure if itâ€™s the right decision, especially as Nani was only expressing himself as Arsenal like to and Gallas was simply frustrated at having one of his worst games for the club.
Should Gallas have been punished for taking revenge on Naniâ€™s skill?
ManUnitedPies