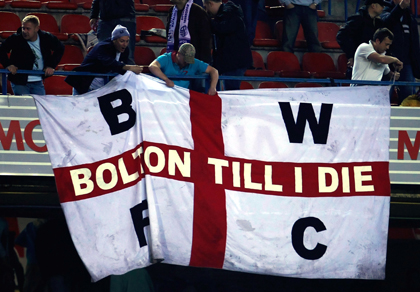 Bolton managed to see out a scoreless stalemate against Athletico Madrid, which took them through to the next round of the UEFA Cup â€“ but celebrations were overshadowed by the heavy handed approach of Spanish police.
Bolton have made an official complaint claiming a supporters were subjected to ‘a number of assaults and unprovoked baton charges before, during, and after the game’
Weâ€™ve seen it before in European away games â€“ with Man United fans left bruised and bloodied after playing Roma a couple of seasons ago and Spurs fans getting a harsh treatment in Seville more recently.
On each occasion itâ€™s been the police that have allegedly been â€˜over zealousâ€™ in their actions â€“ do English fans get a rougher ride in Europe because of past reputations?