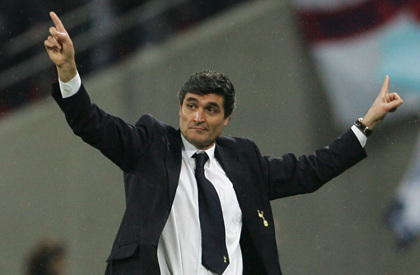 The Spurs faithful werenâ€™t too pleased when the club decided to replace Martin Jol with Juande Ramos this season â€“ although it was more to do with the clubâ€™s handling of the situation than the new manager himself.
But, with Spurs claiming their first silverware for nearly a decade, memories of Martin Jol are quickly being forgotten. Ramos has done everything right in a short space of time and Spurs now look well placed to compete for a Champions League position next season â€“ even if it is a year later than chairman Daniel Levy expected.
It reminds us of another Iberian manager who came, saw and conquered the English game in his first season…

Since arriving Ramos has transformed Spurs from unfocussed individuals into the most improved team of the season. He brought with him a winning mentality supported by trophies, experience and a clear vision for the club. His revolutionary dietary changes have seen the club slim down and become more competitive while his tactical knowledge has taken Spurs to the next level.
Ramos managed to retain the services of Dimitar Berbatov and bought well in the January transfer window â€“ especially with Jonathan Woodgate who has not only helped shore up a leaky defence but scored the winning goal in the Carling Cup Final.
With the Carling Cup securing a place in Spurs’ trophy cabinet, Ramos will now set his sights on the UEFA Cup. Spurs have reached the last 16 with some impressive performances in Europe â€“ and with successive UEFA Cup victories with former club Sevilla, a personal treble is still on the cards.
No other club manager has made such an impact in his first season since a certain Jose Mourinho, who also claimed the Carling Cup as his first domestic trophy in England.
Is Juande Ramos the new Special One?