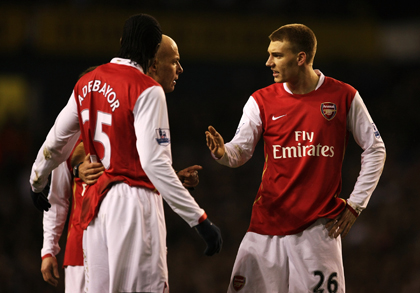 Sir Alex Ferguson rarely makes any comment without an ulterior motive. So, when he recently claimed that the Premier League title could be decided by goal difference, it was probably a barbed comment relating to Arsenalâ€™s striker shortage.
Eduardoâ€™s unfortunate injury means heâ€™s out for the season while Robin Van Persie is yet to return from his latest injury. That leaves a lack of experienced support for Emmanuel Adebayor, with Nicolas Bednter and Theo Walcott the only other recognised strikers at the club.
Despite scoring his first Premier League goals at the weekend, Walcott is still struggling to adapt to life at the Emirates â€“ which means Arsenal could have to rely on â€˜just not good friendsâ€™ Bendtner and Adebayor.
Can they settle their differences to score the goals that secure the title?

Everyone will remember the on field argument between the two during Spursâ€™ demolition in the Carling Cup and some claim that Arsenal havenâ€™t been the same since.
Bendtner replaced the injured Eduardo at Birmingham but there were few signs that the two had put the past behind them, especially after Adebayor failed to square to an exasperated Bendtner for a certain goal.
United have a four goal difference with their next two games against bottom clubs Fulham and Derby expected to increase that advantage.
Let us know if you think Adebayor and Bendtner can get it together in time to save Arsenalâ€™s season?